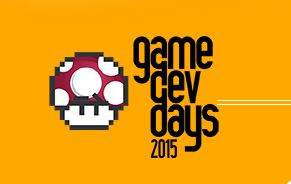 GameDev Days 2015 in Tallinn on April 8th and 9th, 2015. Featured speakers include people

general advice as well as share their experiences in developing. The business part of the

conference will handle pillars of the game business – finding and keeping users. A new segment

globe. The topics will include gaming psychology, neurosciences and using games in education. A

“What we have here is the largest gaming-related conference in the Baltic and Nordic countries.

The conference will bring together international top developers from three fields: scientists

working with games, enterprises creating games and developers creating the technologies behind

the games,” explains associate professor of BFM and one of the organizers of the event, Andres

In addition, developers from Estonia and other countries will present their new games at the

30 companies. Many Russian and Ukrainian companies, who enjoy the transparent business

culture and the e-services in Estonia, are also moving here. The potential of the gaming industry in

Estonia is comparable to the Nordic countries, where one position in the gaming industry

http://gamedev.ee. The final programme will be published in the middle of March.