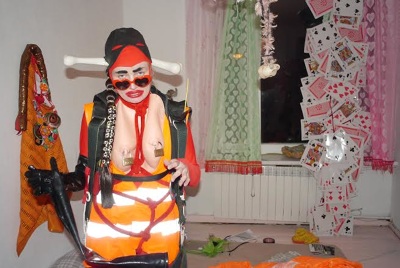 Kris Lemsalu (b. 1985, Tallinn) is an artist based in Tallinn, Estonia and Vienna, Austria. She has studied at the Estonian Art Academy in Tallinn, Danmarks Designskole in Copenhagen, and at the Academy of Fine Arts in Vienna.

Having studied ceramics at the Art Academy in Estonia, Lemsalu often experiments with traditional techniques to create her multilayered works. Animal body parts or delicate sculptures of clothing objects made of porcelain are mixed with found natural materials – fur, leather and wool for example – to create staged installations. These can be self-sufficient sci-fi-like narratives, or alternatively act as a stage for Lemsalu’s own performances. Sometimes the sculptures become part of her costumes. Appearing luxurious, the explicitly fragile works highlight the cynical aspect of art’s desirability while providing an antidote to that cynicism by means of dark humor.
Performance
May 14–17, every day 11am-2pm and 3-6pm

Lemsalu has shown widely both in Estonia and internationally. Her recent solo exhibitions include “Lord Got To Keep On Groovin’” at Temnikova & Kasela gallery, Tallinn (2013); “Top Sinner” at Pro Choice, Vienna (2012); “EVIAN DESERT” at Tanja Wagner gallery, Berlin (2012); and “Being Together” (together with Edith Karlson) at Temnikova & Kasela gallery, Tallinn (2012). Her works have been included in several group exhibitions including “I’m A Painting” curated by Merike Estna at KUMU Art Museum, Tallinn (2014); “Urschleim” at Fauna, Copenhagen (2013); “is my territory.” curated by Monica Bonvicini at Christine König Galerie, Vienna (2013); “Jeden Tag Gelatin” at 21er Haus, Vienna (2013) and Glasstress Gotika at Palazzo Cavalli-Franchetti, Venice (2015).